– Is that smell that your nose is picking up bed bug smell?

– What can I do about it and how long is it going to take?

We’ll try to answer both questions (and other things!) on this post. And we’re going to do it thoroughly, leaving nothing unsaid. But if you still have a question that you feel like our post isn’t answering, feel free to ask us a question.

Bed bugs can produce a variety of smells, but most people describe the smell to be musty and sweet. Some other people describe it be more like cilantro, rotten wood, cinnamon or even crayons. It’s a clear indicator that you have bed bugs and that you should take care of the problem as soon as possible.

Of course! Humans can smell bed bugs. That’s why you’re reading this post most likely.

But it’s a little bit more complicated than just that. We wouldn’t include a section of this post if it wasn’t!

And it’s complicated for a couple of reasons.

1. Because not all people have a sensitive nose. Bed bug smell isn’t extremely strong when it first starts to be noticed, and unless you’re paying attention, some people might miss it.

2. Because bed bug smell can be easily confused with other things that smell. I think this happens because we don’t usually consider the possibility of having bed bugs, so our mind tricks us into finding another source for the smell. But the fact is that a lot of people are smelling bed bug smell but think that “that smell is coming from the pool”.

3. Because bed bug smell happens gradually. It’s impossible for a human being to smell a single bed bug in their house. But as they breed and their numbers grow, the smell becomes more and more obvious. But because it happens gradually, you might get used to the smell and never realize that “that’s a new smell”. You might even think that that’s just how your house smells. Period.

If you add up these reasons, you probably understand why some people don’t notice the bed bug smell (especially early on).

Is it a big problem?

If you can smell bed bugs, then that probably means that you have bed bugs. You could be almost certain of it unless treatment was applied in the previous months. In that case, the smell could take some time to dissipate (if that’s the case, take a look at the What does bed bug smell like after treatment). But on any other scenario, you do have bed bugs.

The more your house smells like bed bugs, the bigger the problem you have. If only a bed bug smelling dog (or professionals) can detect the smell, then you don’t have a big problem. But if anyone can smell it right when they go into your room, that means that you have quite a big infestation and you should take care of it immediately.

As we mentioned, bed bug smell isn’t an early indication of bed bugs. If you can smell it, you already have a problem. If you want to look for signs of an early infestation, search for bed bug poop. You’ll see bed bug poop long before you notice any smell. If you’d like to know more about bed bug poop, we wrote a whole post about it: What does Bed Bug Poop look like? and How to Clean it?

Dog’s noses are 40 times more sensitive than ours. So, when a dog is trained to find bed bugs, they’re going to do a better job than we humans do.

But only dogs that have been trained are going to be able to let you know if they found bed bugs. The fact that you have a pet dog is not going to help you find bed bugs sooner. Dog’s are wonderful pets, but they’re not useful in this case I’m afraid.

But if you’d like to hire a bed bug smelling dog (or if a professional tells you that he’s going to be using one), then that’s great! More power to you!

But is it strictly necessary?

I would say it isn’t. Bed bug smelling dogs are a great way of knowing if you have a bed bug problem before it becomes a BIG problem. But there’re other (easier) ways of finding out yourself. The main one being: looking for bed bug poop (although there are other signs like bed bug shells, or bite marks). But if you feel safe using a smelling dog to do the job, then that’s a great option too! I know a lot of people that use bed bug smelling dogs because they literally can’t see bed bug poop (even with glasses). Bed bug’s poop looks like little ink dots on your sheets, so I get why some people can’t see them.

If you’d like to know more about how to find and identify bed bug poop, we have a post about that:

What does Bed Bug Poop look like? and How to Clean it?

Having bed bugs is very annoying for many reasons! And their poop is one of them. Learn what it looks like, how to clean it and how to prevent it from appearing again!

It could also be due to the fact that there are over 70 species of bed bugs and there hasn’t been (to my knowledge) a comprehensive study on what the different species smell like. But who knows!

We’re going to do our best to give you everything you need to identify bed bug smell.

It’s hard to answer this question because bed bugs smell for very different reasons. We know that bed bugs use smell to mark their harborages. That way they know how to get back to their hiding spot or to their prey when in danger. But we also know that bed bugs can willingly give off a different smell when they’re frightened (a far worst smell, btw). And they can also smell when they crushed! And you might be crushing them at night every time you move.

So… there’re a couple of reasons why bed bugs smell. That way, when I say “what they usually smell like”, what I really mean is “what the combination of the different smells that come from bed bugs smell like”.

That being said, these are the most common ways of describing bed bug smells:

All of these are legitimate ways of describing bed bug smell. If you can clearly identify one of these smells, then most likely you do have bed bugs.

There are also some other bed bug smells that make people wrongly believe that they have bed bugs. I don’t know why some of these have spread around online, but they’re not true.

These are a couple of smells that DON’T mean you have bed bugs:

These are questions we get asked all the time:

Can my house or apartment smell like bed bugs after treatment?

Yes! It can. A study from North Carolina State University proved that the levels of histamines are up to 20 times higher than non-infested homes… 3 months after treatment! That doesn’t mean that it will smell after 3 months. But it could.

Did the professionals I hired do something wrong?

Probably not. There’s no treatment that can guarantee the elimination of the smell. I should help, but there’s nothing a professional can do about it specifically. I is their fault if they didn’t completely kill the bed bugs. But that’s a whole different problem.

What can I do about the smell after treatment?

Unfortunately, not much. You can use air fresheners, but that’s it. These are Amazon’s Best Sellers: 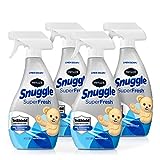 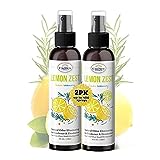 How to prevent Bed Bug Smell

Unfortunately, you can’t. The only way to prevent bed bug’s smell is not to have bed bugs. I wish I had a magic solution, but I don’t.

What I can do is recommend you a couple of products that make a huge difference in killing and preventing bed bugs. Both of these products work like a charm. Using these products is the best advice I can give you:

There’s an article in Nature Magazine that studied in depth how bed bugs find their prey to feed. There’re 3 ways they do this: body heat, a higher concentration of CO2, and… our smell.

That’s something that we’ve known for years because it’s not unlikely for bed bugs to appear on dirty clothes. Bed bugs usually feed on the same prey every single day. And learning and remembering the way their prey smells is an evolutionary advantage.

What can we do about it?

Unfortunately, not much. The best thing you can do is use the bed bug detergent that I mentioned earlier (here). They will smell you, of course. But they won’t want to climb your sheets if you clean them often.

And that’s it! Everything you ever wanted to know about bed bug smell in one simple post.

As we’ve seen, their smell is a way of identifying bed bugs. But there’re better ways. The easiest one is… take a picture! And then compare it to this one right here:

But beware! Even with the picture, some people can’t tell the difference between bed bugs and carpet beetle. They’re quite different to be honest, but people still get it wrong over and over again.

We have a post that shows 5 differences between both bugs, so you can to identify each:

Are These Carpet Beetles or Bed Bugs? 5 Main Differences

Did you find a bug in your house and don’t know what it is? This guide (with pictures!) will help you identify if it’s a bed bug or a carpet beetle. Easy! And what to do next to get rid of them!